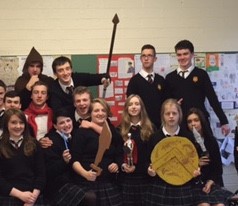 Classical Studies is uniquely placed to develop a range of skills and capabilities in preparing pupils for life and work. As a subject it helps to develop skills in analysis, interpretation, summary, argument, evidence gathering, discussion, communication, performance, and creativity. Although the subject is dependent upon texts, imagery, and written evaluation Classical Studies will suit a pupil who has an interest in storytelling, adventure, and the study of the human psyche. The subject seeks to foster an appreciation for uniqueness and develop an analytical and communicative mind in a variety of disciplines.

For the Junior Cycle pupils of Classical Studies will read and enjoy the world of ancient Greek and Roman mythology. These stories continue to excite and inform our understanding of the world around us and they form the basis of Junior Cycle Classical Studies. The course allows pupils to explore the reasons for mythology and story-telling, to collaborate in class on creating their own stories, and discuss attitudes towards gender and sexual norms that stories and mythology reflect. The world of ancient Greece is explored through the lens of Homer’s Iliad and the world of Achilles. Concepts and themes such as heroism and honour are evaluated and comparisons made to contemporary views. Finally, the world of Rome is examined through the study of the buildings and physical structures of the city as the centre of a vast empire functioned, lived, and breathed. This allows the pupils to learn about the people who created, defined, and built the Roman Empire. Please click here to visit Junior Cycle Classical Studies curriculum.

Pupils in Transition Year at The High School will take a Classical History module as part of their revolving course options. This module explores the Classical Age of Ancient Greece (c. 490 BC to 323 BC) with particular focus on the Persian invasions of Greece and the Battle of Thermopylae in 480 BC. Special attention is also placed on Spartan society, culture, warfare, and lore. Pupils will have the opportunity to present practical projects on the subject matter such as creating Spartan warrior costumes, cooking a Spartan meal, or putting on a short play depicting Spartan life. No PowerPoints allowed!

Pupils of Classical Studies in the Senior Cycle have the privilege and opportunity to study epic mythology, with focus on Homer’s Odyssey and Virgil’s Aeneid. They will take modules in Greek Drama and analyse different plays which serve as inspiration for all contemporary playwrights in dramatic tragedy today, as well as engage in in-depth examination of Ancient Greek and Roman Art and Architecture, and an assessment of the lives and careers of Alexander the Great and Julius Caesar.

The revised Senior Cycle Classical Studies course covers 4 strands. Strand 1: The world of Heroes where pupils will focus on ancient mythology, Homer’s Odyssey, Virgil’s Aeneid, and other heroic depictions from the ancient world to explore how men, women, heroes, and villains were portrayed and evaluate how they fit within contemporary views of heroism and gender. Strand 2: Drama and spectacle uses ancient Greek theatre and plays, such as Oedipus the King by Sophocles or Medea by Euripides to explore a range of philosophical and psychological themes. Strand 3: Power and identity uses ancient texts to focus on Alexander the Great and Julius Caesar and evaluate how they rose to prominence and engaged with the world around them. Finally, Strand 4: Gods and humans examines the world of Classical mythology and its impact on the physical world through funeral customs, religion, the origin of places, and the natural world. This course was launched in 2021 so please click here to visit the revised Senior Cycle Classical Studies curriculum.

Studying Classical Studies in school is not proscriptive in terms of career opportunities. As so many disciplines are encountered, the subject can appropriately cater for any form of Third Level Education and beyond.

There is the opportunity with Classical Studies for trips abroad (e.g. British Museum in London, Parthenon in Greece, Pompeii in Italy), although a trip is not a guaranteed annual fixture in a Junior or Senior Cycle course. There is also the possibility of entering the Classical Studies Speech competition held annually at Trinity College, Dublin as well as the chance to attend several other events throughout the year such as the annual Ides of March Classics Table Quiz organised by the Classical Association of Ireland Teachers. Trips to smaller venues (e.g. UCD Classical Museum), along with going to see visiting productions of Classical plays, abridged epics etc. are also possible.